To promote their new locally owned locations, as well as their new reward program, My Circle K, powered by Colvin Oil decided to run some gasoline promotions.  After all, nothing accelerates a good promotion like discounting the price of gas.

The One location-One hour promotion was born.   They would take one of the 54 My Circle K gas locations and drop the price of gas 50 cents a gallon for one hour.  We teased it on Facebook and Twitter the week before and made the announcement via Facebook and Twitter just two hours before the promotion began.

A core element of creating something special is relying on the fact that you don’t have all the answers or all the fans.  That reaching out to the right pages to help spread your message, is the difference between having a decent promotion and it going off the hook.

For every location and every promotion a different strategy should be used.  In marketing and promotions we live in a grey world, no black and white, find a good formula tweak it and hope for the best.  This is the formula that we used on this particular promotion.

We used Facebook, Twitter for pre-promotion, driving traffic to the website for a further explanation of the promotion.  We had also sent out a couple of media teasers to make them aware of what was going on and when.

How active are they? How do they react?  Some pages react on a dime, others not so much.  For promotions you want to pages that react, as well act as a leader of information happening in social media, not just traditional media.

We reached out to community pages and they reached back: Knowing your media, reaching to the media using how they react the quickest: How people reacted during and what they had to say after the promotion on Facebook: 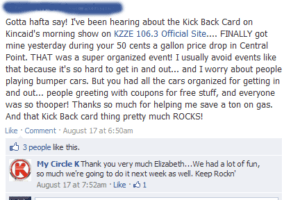 The promotion using Facebook was a HUGE success.  We have since replicated the promotion in other markets and this past week in Redding they were lined up and ready… Prior to social media promotions, successful promotions were geared for and set up to be promoted through radio, TV or print advertising.  With addition of social media we can be more creative with promotions, gear them towards social media but include traditional media.  As an advertising agency it’s important to be able to combine all the different possibilities to create successful outcomes.