No Tiger Means Twitter Stream Instead of Talking Heads 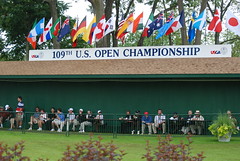 It is the eve of the US open.  As a society we seem to have a fascination with knocking people off of their pedestal, gawking at a car accident, seeing a train wreck, which is exactly what the US Open tends to do.  Men who make the game look so easy week in and week out  will be brought to their knees this week.  With the USGA’s goal of the greens running at 14, it will be much like putting in your bathtub and trying to stop the ball short of the drain.

What I am really looking forward to this weekend is the twitter action.  I have been on twitter for 3 years  and without a doubt, the most fun I have had on twitter was at this past Masters during Sunday’s final round.  It may have been that it was perhaps the best 4 hours of drama and action golf has seen in a while, and twitter certainly enhanced it and took it to a new level.  Not much on TV makes me too excited these days, a major is one of the things that still can.

The interaction of tweets taking place as Rory was having a meltdown, eight players were within two shot on the back 9 was almost as exciting as the golf itself.  What do you watch, your twitter stream, CBS’s on-line coverage of amen corner or CBS’s national broadcast?  The commentary on twitter was certainly more entertaining than the talking heads on TV.

I met a lot of good people that day from all over the world that Sunday and look to having the same kind of fun this weekend.  With Tiger not teeing it up, twitter becomes that much more important for me.  I will not have a horse in this race, I will be rooting for the course to win instead of any particular golfer.  For that reason, twitter will certainly enhance the tournament for me.

The talking heads are going to spend too much time talking about what I’m missing, watching Tiger play at a high level.  If you had a shot contest for every time the talking heads mention that Tiger is not playing you will be passed out before the leaders tee off on the first hole.

There is only so much of that a Tiger fan can take.  It’s been a long 18 months with only a few days of brilliance.  Listening to the NBC telecast try to justify the tournament is as good as it would be if Tiger was there, well good luck with that.

Therefore, the volume will be down, the twitter stream will be turned up, and I will be rooting for golf to continue on Monday…