Do Customers Really Need to See Your Message Seven Times?

Do Customers Really Need to See Your Message Seven Times?

You likely remember this advice--a person must hear a message seven times before it fully registers with them.  Is this true? 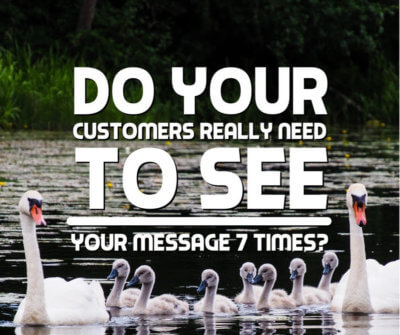 You likely remember this advice because you’ve heard it so many times–a person must hear a message seven times before it fully registers with them.  Is this true?

What’s the big deal about “seven”?

In 1956, Harvard University psychologist George Miller published a paper about his studies into “channel capacity of the mind.”  In short, he found people can hold about seven bits of information in their heads at any given time.  That’s why phone numbers were comprised of seven digits.  If you give people a list of ten items and ask them to repeat it back to you, the average number they’ll remember is seven of the items.   This likely explains why Stephen Covey teaches only seven habits of highly effective people.

But what about repetition?  Does seven apply there?

First, let’s look at what repetition of a message does.  There’s a term called “cognitive ease,” which represents the amount of energy your brain uses to feel a statement is true or good.  For example, when your brain reads the sentence, “The sun is hot,” it doesn’t spend much energy before agreeing with the statement.  The brain accepts it as accurate and moves on.  Even if you’ve never touched the sun to determine how it feels, you know this to be true because you’ve heard it many times.  In fact, the more times you hear any statement, the more your brain is likely to feel it is true.  This is the result of cognitive ease.

The second impact of cognitive ease is that the human brain judges the repeated message or content more favorably.  The more times you see a particular color and model of a vehicle, the more likely you are to develop a good opinion of it.  The more time you hear the name of a business, the more likely you are to have a good impression of it.  This happens because your brain likes to feel cognitive ease, rewarding you with pleasant thoughts or feelings.  Think of your favorite advertising jingle, and I’ll bet it makes you smile.

While repetition is essential for remembering a message and creating cognitive ease, there’s little to support a magical “seven” occurrences.  Instead, seven is an easy-to-remember target to achieve.  In reality, more is better, but seven is a good minimum goal.

What happens when a message goes wrong.

Marketers can use cognitive ease for good or for exploiting human psychology.  Propaganda works because of the principle of cognitive ease.  The more times someone hears a specific message, the more likely they feel it’s true.  Soon, they go beyond feeling it’s true to feeling good about it, too.  The message feels “right” and “comforting.”  Propaganda tactics have been used for centuries to control and direct people and their unconscious thoughts.

What does this mean for your marketing?

Your target audience needs to hear your company’s name and your message many times to develop a memorable, favorable opinion of it.  It might be seven, it could be twelve, but it’s definitely more than three.

To be successful in creating a favorable impression, you need a consistent message.  When possible, use the same words.  Make it concise–in seven words or less.   “Can You Hear Me Now?” because “There are some things money can’t buy.”

Use multiple channels.  When the brain hears the message in one location and reads the same message in another location, it is more likely to code the statement as truth more rapidly.’’

Finally, remember that the process doesn’t just help a potential customer remember your company’s name and the message–the process of establishing cognitive ease will give people a more favorable opinion of your business.  They will be more likely to choose you or even refer you to someone they know.

Our team at Paradux Media Group has spent decades in marketing, helping companies in a variety of industries develop marketing strategies and implementing plans that work.  Give us a call to learn more about how we can help you achieve your goals.

Thanks for letting us know!
This is how we improve bertha
What did you expect to happen?