Function and Impact of Political Advertising Agencies on Political Campaigns

If you are a political contestant, hiring one of the political advertising agencies can make an enormous impact on your campaign.

What does political advertising entail? 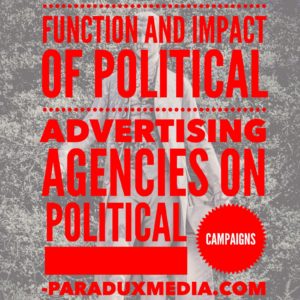 Remember an election is highly competitive and in most cases, a candidate has more than one competitor to beat. As a political advertising agency, one of the biggest roles is to ensure that a client gets the best political campaign using a range of platforms, services and products. The print media, social media, and traditional advertising are used in the most efficient and effective ways to ensure that the client gets enough coverage. Social media advertising incorporates video and SEO techniques by producing highly customized and relevant content for a candidate using techniques that make it easier for search engines to rank such content. Consulting is also part of political advertising. The agency has the best political analysts to share with the client on the best strategies to employ to win the masses. Research is another key area in political advertising. As a candidate, you need to know the latest trends both in voting and campaign management to win.

Services of a political advertising agency

As pointed out above, the core purpose of an agency is to ensure the candidate wins an election. This is achieved by incorporating creativity, relevance and quality of the services produced for the client. In case the candidate uses traditional broadcast or television, the agency takes care of video production or any other content to ensure traditional media complements their online marketing. Social media marketing optimization is done by professionals to ensure the candidate gets a significant number of loyal followers both on Facebook and Twitter. Web developers help the candidate develop highly interactive and user-friendly website that is integrated with social media and other popular sites or forums to increase traffic. All these platforms are managed efficiently by the agency using highly customized tools thus freeing the candidate to concentrate on the most important aspects of the campaign. Other services include; campaign management, campaign planning, and corporate communications.

If you are considering employing the services of these agencies, then it is important to understand how much it will cost you. Naturally, this depends on the services you require and your desired post. A senator and a president require different strategies to win, as such the agencies charge clients basing on the nature of coverage and aggressiveness of the campaigns a candidate requires to win. Some candidates are known to spend up to 6 billion dollars in one campaign with a huge percentage of this being payment to political advertising agencies. But smaller and local elections can be won without spending billions – and this is where a political advertising agency can help to save costs by making smart decisions about how to get your message out there.

Once you contact a political advertising agency, the following steps are undertaken to ensure your campaign is successful:

If you are a political contestant, hiring the services of a political advertising agency can make an enormous impact on your campaign. Like every other field, advertising in politics has gained prominence as more candidates appreciate the impact of the efforts of the agency in their campaigns.